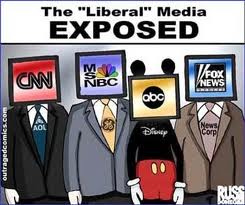 Much of the media is liberal, but not in the sense of being left-wing as the American far right maintains.

From the very beginning of the so-called Cold War there were lurid tales promulgated of an international communist conspiracy. Teachers, university professors, Hollywood filmmakers and actors, artists, writers, and of course the “liberal media” were all a part of this vast conspiracy; it seemed that the communists had infiltrated every sector of American society, and especially those dealing with the news and entertainment media, education and culture.

However, when it comes to the idea of the so-called liberal media supposedly trying to help prepare the way for a communist takeover, I believe this narrative, like so much else in America, is upside-down. And yes, right-wingers are still very much convinced of this communist takeover, although they often now refer to it as the new world order (NWO) or the globalists, collectivists, Illuminati, etc. – same basic idea.

The mainstream or liberal news media preaches to an increasingly smaller and smaller choir. By all accounts they have rock-bottom ratings and yet they persist in doing the same thing. Like Trump of today, the mainstream media (MSM) also gave plenty of coverage in the 90’s to presidential candidate, and “former” KKK imperial wizard, David Duke, without directly challenging his racist past which he claimed to have abandoned. The MSM enabled David Duke, just as they enabled Trump, through sensationalism. It’s a case of reverse psychology. What happens when you tell someone: Whatever you do, don’t look, don’t go there, don’t do that!? They do the fucking opposite, almost out of instinct or an innate sense of morbid curiosity. Remember the old Hollywood adage: There’s no such thing as bad publicity.

There appears to be a contrived US left-right debate formula: Liberals (the fake left) consistently make fun of and condescend the conservatives and then you get a continual backlash and the conservatives just dig in their heels and double down on their craziness. You had the same hostility and vicious mockery from liberals and Democrats toward Bush Jr. through entertainment media with shows like That’s My Bush, Lil’ Bush, The Daily Show, Bill Maher, etc. This continues today. The result is that the US “left” (which is really centrist at best), along with left ideas as filtered through these liberals, become further alienated and the country as a whole moves further to the right.